Iowan horse farmer William Elliott Whitmore’s fifth outing is an insipid collection of outlaw country (Johnny Law), downbeat porch-songs (Hell Or High Water) and overwrought lullabies (There’s Hope For You). With his growling delivery and vagabond narratives (“I miss my home and family/The hills and the road”), comparisons with Seasick Steve are inevitable and for the most part, justified. But where Seasick peppers his tracks with anecdotal humour, the thirty-year-old Whitmore is morose and lacklustre. What ensues is an unconvincing, clumsy album that’s enjoyable in all-too-brief glimpses, such as Who Stole The Soul, but spends the rest of the time wallowing in a melancholic stupor. 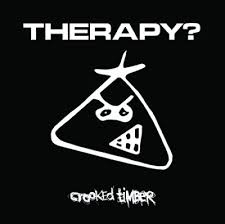 Since arriving on the coattails of the grunge explosion in the early ’90s, Therapy? have been ploughing a stubborn furrow, oblivious to public opinion and unmindful of changing fashions. Album number 13, however, finds the Northern Irish rockers strangely in vogue. Crooked Timber is a darker, heavier companion to the FM-friendly alt-rock the nation has been lapping up in recent years. Andy Cairns’ heavily accented vocals take a backseat to crunching guitar riffs and a dense, breakneck rhythm section. Tuneful and hard-hitting, if a little laborious at just under an hour long, Therapy? could be set to profit from the success of such fresh-faced heirs as Biffy Clyro.

3 Comments
Q Magazine, Track OF The Day, we were promised jetpacks

Many record labels promote themselves as having a familial set-up; nurturing young bands through their first steps in the music business. Over the past few years, though, FatCat Records have taken the template to another level. A few years ago, their A&R men snapped up a Kilsyth three-piece, The Twilight Sad. They promptly shipped them out to America, rightly anticipating the positive reaction frontman James Graham’s broad Scottish brogue would gain from audiences out there. Their debut album, Fourteen Autumns And Fifteen Winters drew huge critical acclaim as the dust settle on 2007. So what did FatCat do? Why, sign their best mates of course.

Said best mates – and frequent touring buddies – Frightened Rabbit repeated the trick last year with their exceptional second album, The Midnight Organ Fight. The record scored highly in several end-of-year-lists and earned the band praise from the likes of Biffy Clyro, Jimmy Eat World and Death Cab For Cutie, who invited Frightened Rabbit to support them on their European tour late last year. Which leads us to today’s track by We Were Promised Jetpacks.

Born in Edinburgh, based in Glasgow and friends of Frightened Rabbit, WWPJ were the next addition to FatCat’s now burgeoning Scottish stable after the keen-eyed label noticed them whilst perusing FR’s MySpace friend-list. They accompanied Death Cab for a number of dates on the aforementioned tour and have been whipping up their own little storm of hype ever since. WWJP will be releasing their as yet untitled debut album in May of this year. Whether they will repeat the success of their compatriots and stable-mates remains to be seen, but the early signs are extremely promising.

Comparisons with Franz Ferdinand are flattering but not hyperbolic, as demonstrated by today’s track, Quiet Little Voices. It’s a blistering post-punk anthem of the highest pedigree: powerful and tuneful in just the right measures, with lead singer Adam Thompson’s understated vocals keeping proceedings in check just as they threaten to spiral out of control. It’s a definite statement of intent ahead of the band’s upcoming SXSW debut and a spring album release expected.

Celine Dion. Bryan Adams. Nickelback. Shania Twain. Not a very inspiring list, is it? Just a few years ago, though, these four behemoths of the power ballad largely represented the face of Canadian music in popular perception. The landscape was bleak. Over recent years though, thanks to thriving underground scenes in Montreal and Toronto, as well as the increasing influence of the Blogosphere, things are looking up.

Led by Arcade Fire, the Montreal acts were the first to make the breakthrough, producing bittersweet baroque-pop capable of making you both dance and cry at the drop of a hat. The Toronto acts made a slightly less dramatic commercial impact but with the buoyant, free-form melodies of Broken Social Scene, the 16-bit sampling nous of Crystal Castles and the sharp, clever post-punk of Tokyo Police Club, have wowed commentators with a roster as diverse as any other in the world.

Toronto’s The Coast have been billed as “Canada’s best kept secret” and independently exemplify the diversity of their hometown scene. Theirs is a blend of synths, shoegaze guitar and clever, singalong choruses, perfectly embodied in today’s track, Tightrope.

Tightrope is taken from their full-length debut album, Expatriate, which was released on February 9 on Aporia Records. It’s a climactic combination of the cluttered dream-pop of Animal Collective and the expansive, multi-vocal sound of the aforementioned Broken Social Scene. Having played a recent UK tour and gigged with The Dears, Foals and A Place To Bury Strangers, The Coast’s stock is rising.

Leave a comment
Q Magazine, The Noisettes, Track OF The Day

The Noisettes – Don’t Upset The Rhythm

The Noisettes may have a bog-standard three-piece-band line up, but that’s about as close as they get to the humdrum of indie life. For in Shingai Shoniwa, they have a lead singer blessed with a voice so soulful, it makes Beth Ditto sound like one of the Cheeky Girls.

The Croydon trio burst onto the scene with their well-received debut album, What’s The Time Mr Wolf? in 2007. They went on to earn support slots with the likes of Muse, whilst Shoniwa followed Kate Jackson of the Long Blondes into the hat as some over-zealous quarters stepped up their search for the ‘British Karen O’. Sadly, sales didn’t quite match the rapture of the reviews.

The Noisettes return in March of this year with their second album, Wild Young Hearts. Today’s track is the first single proper to be taken from it, Don’t Upset The Rhythm. It isn’t released until next month, but the chances are you’ve heard this one dozens of times already. It’s become ingrained in the public consciousness since being used to soundtrack a Mazda ad since January, but don’t let that put you off.

Don’t Upset The Rhythm is a rollicking, dancefloor-friendly blend of rock n roll, disco, funk and lashings of soul. Unsurprisingly, Shoniwa’s vocals dominate proceedings: smooth, sassy and vintage. The vitality of this track recalls Basement Jaxx’s classic debut single Red Alert, now astonishingly ten years old. Whether it will age as well remains to be seen, but Don’t Upset The Rhythm is released on March 23, with Wild Young Hearts set to follow on March 30.

In the pop-princess-with-attitude stakes, Britain is in grave danger of being left behind the leading pack. New Zealand has been mockingly thrusting Pip Brown (Ladyhawke) in our faces for the best part of a year. America’s potty-mouthed diva Katy Perry’s kiss-and-tell antics have seen her hog column inches and chart positions in equally obscene measures. Even Canada has gotten in on the act: the blueprint for punk-pop sprites worldwide, Avril Lavigne, has now sold over 30 million records.

It would seem the hopes of a nation lie in the fortunes of16-year-old Alex Roots, who combines the looks of Ladyhawke and the feistiness of Perry with the hook-driven sugar-punk of Lavigne. And it’s all delivered in an English accent.

Today’s track Don’t Stop Looking is taken from her forthcoming album, Adrenaline Rush and is a slice of playful, infectious electro-pop that’s as much a throwback to iconic trendsetters Lauper and Wilde as it is a reflection of any of Roots’ peers. The musical dials are set for the summer of ’88 here, with Wyld Stallyns-esque guitar solos wailing over the top of an effervescent synth riff. Chances are this one will stay in your head for a while. Roots’ debut single Fake is out on March 30, with the album to follow in June.

Modesto, California’s most unassuming sons Grandaddy were as unlikely heroes as you’ll ever come across, but when they disbanded in 2006 the the lo-fi, DIY shaped gap they left in the music industry was telling. Equal parts ELO and The Flaming Lips, their preoccupation with robots, obsolete household appliances and straight-up heartbreak was strangely endearing but utterly captivating. Over the course of their four studio album-long career, Grandaddy seamlessly stitched such oddball subject matter to lush melodies, winning legions of admirers.

Lead singer Jason Lytle was the only band member to tour their final record, Just Like The Fambly Cat, as they bowed out in typically low-key fashion. Until recently, not much was heard from Lytle, but he has just popped up with a guest slot on M Ward‘s new album, Hold Time. It’s a timely arrival, and coincides with the announcement of his first solo effort, Yours Truly, The Commuter, on Anti-Records.

It’s news that should delight all fans of the band, not least because many of the song titles (see I Am Lost (And The Moment Cannot Last), This Song Is The Mute Button) could easily have been lifted from a Grandaddy record. The first cut from the album to be made public, is Flying Thru Canyons. It’s a slow, piano led track that, pleasingly, recalls Jed The Humanoid and Underneath The Weeping Willow from Grandaddy’s breakthrough 1998 release, The Sophtware Slump. Yours Truly, The Commuter is released on May 19.

You can hear Flying Thru Canyons here

Perhaps it’s the weather, or maybe the relative lack of daylight. We’ll probably never really know why, but over the past few years the Swedes have unceremoniously usurped their northern neighbours the Scots to become the ultimate purveyors of goofy, glorious and ever-so-marvellously-twee indie pop. With such notable exports (it would be misleading to call them heavyweights) as The Concretes, Jens Lekman, I’m From Barcelona and Peter, Bjorn and John, there seems to be an inexhaustible pool of talent to be plundered.

With their latest offering, That Town, Gothenburg quartet Sambassadeur kindly confirm to us that the Scandinavian invasion is set to continue; the conveyor belt isn’t finished just yet. Sambassadeur (named after Serge Gainsbourg’s Les Sambassadeurs) have been about for a while now; they formed in 2003 and That Town is taken from their second effort, Migration. Lead singer Anna Persson’s dreamlike vocals are not unlike compatriot Victoria Bergsman, of the aforementioned Concretes, but most recently spotted on solo project Taken By Trees: subtle and reserved, but cute as you like.

The sound here is distinctly retro, drawing a lo-fi line between crackly 80s murmur pop and 60s sunshine melodies. Led by an irresistible woodwind hook, it’s deceptively dense; there’s more going on than you might initially think. That Town has a timelessness that suggests we would’ve lapped this up twenty years ago, and probably will again twenty years from now.