An interview with Muse 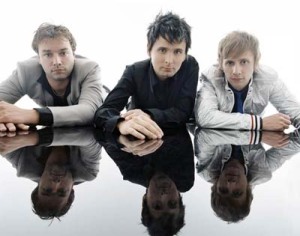 This interview took place in May 2006 – just as Muse launched their spectacular Black Holes and Revelations album. I was holed up in a Soho hotel bar for two hours with about twenty other journalists hailing from The Times to the NME. It was the first time anyone not involved with the band had heard Black Holes… They piped it through the speakers of the hotel bar on repeat as we gorged ourselves on free food and drink, trying to make ourselves comfortable with this bombastic aural assault. The initial shock at the departure and progginess of their new material hadn’t subsided by the time I was marched up to a modest suite on the third floor to confront the architects. The results are below.

Things are getting curiouser and curiouser…

Muse have never been the cheeriest band in the world. The gargantuan and exhausting effort that was ‘Absolution’ foretold impending doom (as I meet drummer Dominic Howard in a Soho hotel room, he concedes it was “a little chaotic and apocalyptic”). Seemingly this forecast was a little premature. We are, after all, still here. As are Muse. And whilst they await their demise, the trio have taken the time to construct another album that couples crippling paranoia and muscular bass lines with the ease most folk would associate with the union of strawberries and cream. ‘So,’ I hear you ask, ‘is the end nigh-er?’ The answer would appear to be “no.”

The immediate clues are in the song names. Whereas ‘Absolution’ groaned with titles such as Thoughts of a Dying Atheist and Apocalypse Please, ‘Black Holes and Revelations’ comes fully loaded with tags like Invincible and Assassin (“shoot your leaders down and join forces underground”), suggesting the Devon boys are all set to lay siege on the Four Horsemen head on. ‘Black Holes…’ is something of a call to arms. The problems have not gone away. It is up to us to solve them. Talkin’ about a revolution? Muse are.

The trio are not renowned for their love of the current political state. Sycophants, they are not. The War on Terror’, is dismissed as an attempt by the regime to increase Marshall Law. “You can feel it happening around you.” Matt Bellamy’s fascination with conspiracy theories has only heightened these feelings of claustrophobia. His suspicions stretch to the media who he is convinced “are tools to familiarise us with being photographed. The popularity of Big Brother is making us comfortable with it… before you know it; we’re just being filmed all the time.” What would Orwell think?

“He’d say ‘this is it… we’re there.’ It’s a drip drip way of doing it, very gradual, but we’re getting there.” Bellamy takes great satisfaction in relating an incident in Norway when the band had been queuing for passport control for an hour. A man strolled straight past them to the front of the line and had “like an eye scan” and ambled on through. A subliminal attempt to make us conform? “Well you either choose between standing in a queue for an hour or scan your eyeball.” The decision is yours.

Part of Bellamy’s fixation with all things offbeat may well be related to his long term partner’s work as a trainee psychologist in Italy, where the couple have set up home. “She treats schizophrenics in Milan who believe these stories. It’s interesting to see how people are taken over by these insane ideas about the end of the world” he quips. “I’m lucky to be with her to keep them at bay!” he throws in, with his tongue pressed firmly against his cheek. So just how much of this interest equates belief? Shall we anticipate a nod toward David Icke’s revelations that the reptilian bloodline is ruling the human race? “Well I don’t believe the lizards bit… that’s a bit far fetched. But it’s a slippery slope!”

One listen to the now bulging Muse back catalogue will tell a soul that this ‘interesting’ preoccupation with the arcane is not exclusively terrestrial. From ‘Origin of Symmetry’: we have Space Dementia and Shrinking Universe appears on ‘Hullabaloo’. ‘Black Holes and Revelations’? Bassist Chris Wolstenholme deduces; “well the black holes bit is a reference to a self destructive planet.”

The tunes themselves tell a more detailed story. Take Knights of Cydonia. “Cydonia is the region on Mars where they think there are structures and possibly could have been civilisation. Once Mars was the same distance from the sun as Earth so there could have been civilisation. I’ve always found that very interesting,” Matt, erm, muses. Exo- Politics is another that surveys the outer realms of our universe and perhaps explores the possibility of alien incursion. “Paul Hellyer used to be Canadian Defence Minister and he made a speech about the US building space weapons. That’s going on at the moment. Are they hiding an invasion? Or maybe they’re setting up some orchestrated crazy space kind of war!” Just don’t tell Lee ‘Scratch’ Perry.

With all this gloom and guesswork, one gets the impression that Muse are quite a serious bunch. Au contraire. Further questioning reveals a lighter side. Indeed, it comes to light that the Teignmouth bunch are quite the jokers and have found the time to devise some treasure hunts that make Anneka Rice look like Mr Magoo, Matt explains, “fans kept collecting our setlists when we’d have working titles down, like ‘Des Change the Keyboard Patch’ (a reference to Muse’s keyboard tech Des). They’d think Des was an acronym for Dead End Street or something crazy like that.”

That doesn’t sound all that strange?

“So I thought I’d see how far they go and put down anagrams and things which were cracked really quickly. So I made it complicated by putting down enigma codes and secret email addresses which led to a treasure hunt.”

“Well it was a bunch of crap bikes we’d bought in Walmart to keep fit when we were touring the States. It wasn’t really that exciting in the end… but it’s the hunt that counts!” So you can add GSOH to political activism and ET fancying in your thumbnail sketch of Muse.

Things may well be getting curiouser and curiouser in the home camp, but that’s no reason to entertain the ludicrous idea that the music would suffer as a consequence. ‘Black Holes and Revelations’ certainly spills the beans on a musical side of Muse we perhaps weren’t aware of (see the single Supermassive Black Hole) but hey, change is good. Let’s just hope the end of the world holds off long enough for us to hear a little more.

One thought on “An interview with Muse”